1. ...owned a restaurant, what kind of food would you serve?

2. ...owned a small store, what kind of merchandise would you sell? 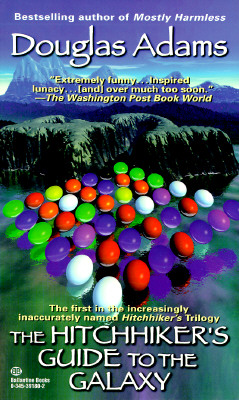 You're The Hitchhiker's Guide to the Galaxy!

Considered by many to be one of the funniest people around, you are quite an entertainer. You've also traveled to the far reaches of what you deem possible, often confused and unsure of yourself. Life continues to jostle you around like a marble, but it's shown you so much of the world that you don't care. Wacky adventures continue to lie ahead. Your favorite number is 42.

Take the Book Quiz
at the Blue Pyramid.


AND this: (shamelessly re-posted from January)

'Tis a great mystery, but somehow you have come to
belong in Jane Eyre; a random world of love,
kindness, madness, bad luck and lunatic
ex-wives. There really isn't much to say about
the place you belong in. It's your place, and
though it seems far from reality largly due to
how random the events are, you seem to enjoy
it. You belong in a world where not too many
people understand you, and where you can be
somewhat of a recluse.


Which Classic Novel do You Belong In?
brought to you by Quizilla

Whatever the genre, it's clear that the plot line will be heavily influenced by some whacky fates that like to toy with the main character.

I wish I could teach the whole wide world to understand and appreciate declaratory and restrictive clauses.

Probably bad music. I am not renowned for my musical skills.

Digression: I was going to boast and say "HA HA! I beat Classical Values to quiz day, but I see Eric has been spending time on something a little more serious. Take a gander at Crushing of Dissent. Superb, as usual. I guess I'll just settle for being comic relief.